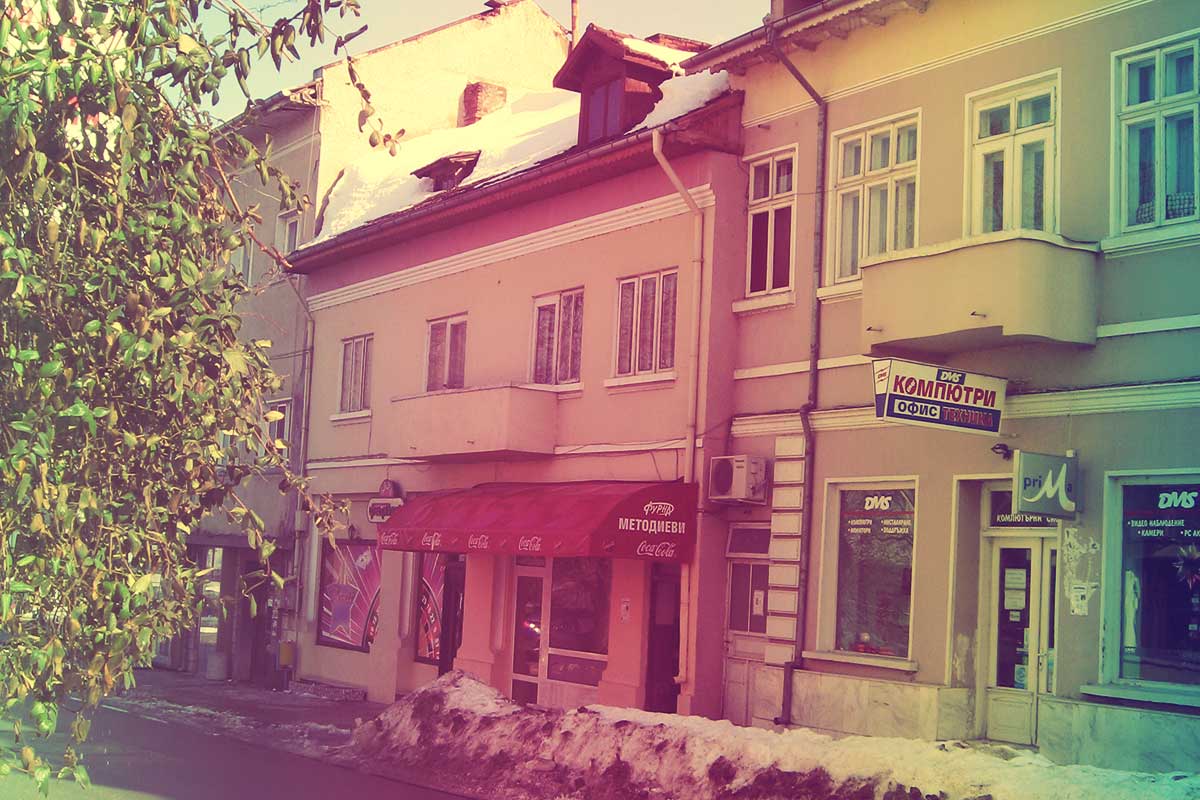 The building has post-Liberation architecture, built after 1932 as a bakery on the first floor and residential on the second. The bakery belongs to one of the famous bakers in Tutrakan – Metodi Teofilov Yankov, who left behind the craft of the heirs of the family to this day.

The history of the family is very interesting – it starts from the village of Sushitsa, Gostivar, today’s Republic of Northern Macedonia with Janko and his son Teofil, who were looking for a field for the inherited bakery craft and reached as far as Dobrudja and Tutrakan with their sons Metodi and Gercho. There they made their own bakery and the work starts. In the “Almanac of the Kingdom of Bulgaria” for 1911 in the sample for Tutrakan he is mentioned as a baker along with another seven. Metodi / born in 1878 / started his family in Gostivar and had 5 sons – Dragan, Matei, Petar, Chudomir and Svobodan, whom his wife Magdalena raised in his native house, and Metodi worked in the bakeries in the distant Tutrakan and returned in the winter to his family. In 1934, Svobodan (known among Tutrakans as Slobodan because of the Macedonian pronunciation of the name), only 11 years old, decided to go with his relatives to see his father, and he detained him to help him with the bakery. Later, Metodi took his family to Tutrakan, made a partnership with other bakers in the town – brothers Georgi and Ivan Arsovi, and the older children Dragan, Petar and Chudomir were assistants. Svobodan studied at a Romanian school, as South Dobrudzha was under Romanian rule at the time.

Time passes, Tutrakan becomes Bulgarian, bakeries continue their work, but the political storms in the Balkans change things for Metodi’s family – only Svobodan and Petar stood with Metodi in Tutrakan, and the other sons returned to Macedonia, because they hold on to their affiliation – Macedonians . Metodi lived out his century in Tutrakan.

And so on the second floor of the house at 33 Transmariska Street live the families of the brothers Svobodan and Petar Teofilovi. Peter’s sons Marin and Zhivko Tofevski and their sister moved to Macedonia in 1967, but continued to visit and maintain their home in Tutrakan, and Svobodan’s sons and daughter, through their children, continued their great-grandfather’s bakery craft to this day .

On November 14, 1948 in Tutrakan was founded Baker Labor Cooperative “New Life” as Metodi Teofilov Yankov was elected chairman and his son Peter as a member of the board of the 18 founders. In the beginning the production of the cooperative was in the old bakeries of the cooperators, including the one on the first floor of the house, and then they build the big building of the Bakery, expanding it over the years with a confectionery shop, which supplies bread and confectionery sold not only in Tutrakan, but throughout Northern Bulgaria. The building is solid brick, has two floors, on the first floor are the rooms of the bakery, with working entrances and in the rear through the corridor entrance to the yard and the entrances to the second floor. The massive terrace, built on the second floor after 1944, was also used for propaganda purposes, most likely

The first floor was used for a bakery, after the relocation of production in the Bread factory, several rooms were established, and in this eastern direction during Socialism for many years housed a workshop for filling softdrinks – 6 stotinki costed filling soda for the home, selling cooling syrups with carbonated water.

Even today you can hear Tutrakans talking about how they remember:

“The best syrup – there is no such thing anymore! 5 stotinki – the big cup. From the time when Bay Kiro was filling soda. The window was moving and you were drinking on the sidewalk, and it was burning outside. With a small ladle, he scooped from the big jar, poured it into the glass, and then poured the soda with the handle – LUXURY!

In the middle room there is a totopoint, in the west – a sock shop.

At “Koopvitrina – 85” in today’s western room on the first floor there is a specialized shop for milk and dairy products.

After the democratic changes, the premises were returned to the owners and Svobodan, although a pensioner, helped to his youngest son Dimitar and his wife Zapryanka – both professional bakers and confectioners in their bakery for many years. Unfortunately, no one in Tutrakan today makes Uncle Svobodan’s boiled pretzels, but even if you smell bread on Transmariska Street today – it will be from the ovens of Metodievi…