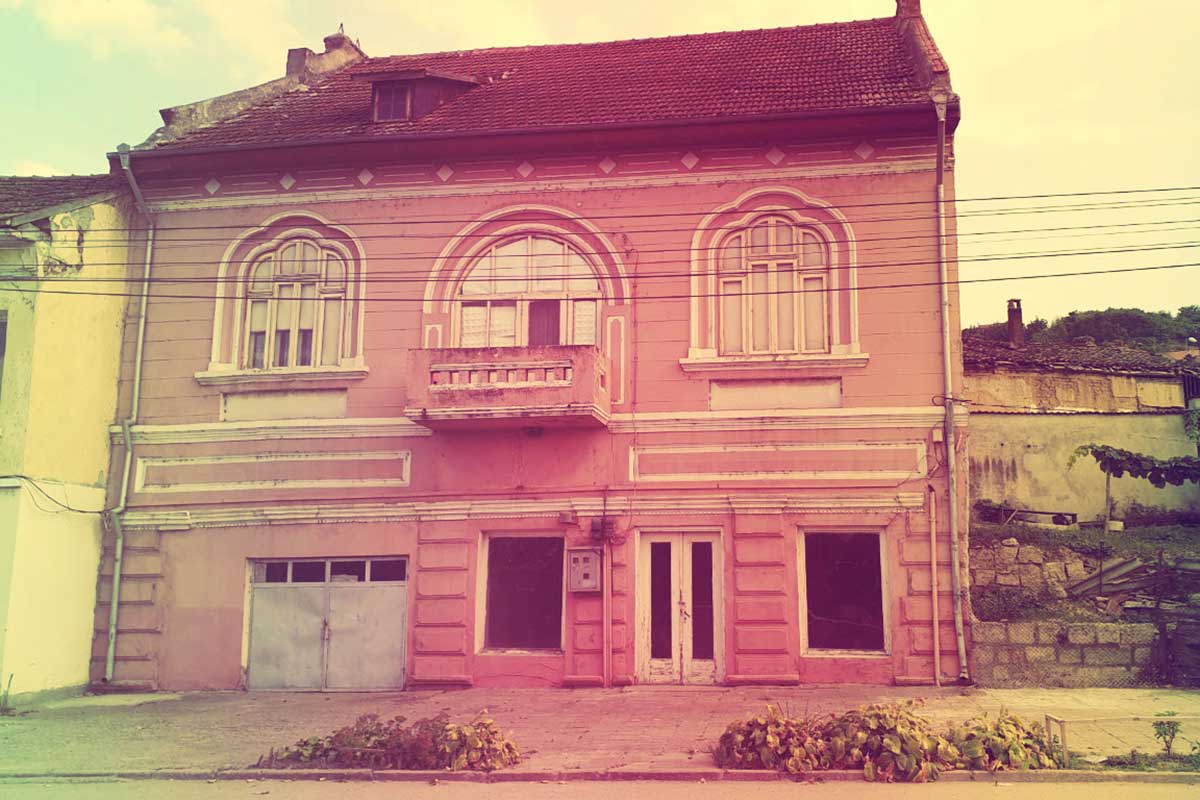 The house was built in 1931 by an Armenian who was a merchant. Downstairs was the shop, which supplied the whole area with food and agricultural implements. The living rooms are located on the second floor.

The family emigrated to Romania during the Craiova Agreement. According to the contract, the house became state-owned in 1941. The mayor of Tutrakan was accommodated in the house in the period January 29, 1941 – October 23, 1943 – lawyer Petar Drumev / additional information about him /.

Son of Drumi Panayotov – Tutrakan district governor between the two Romanian occupations. Born on December 22, 1906 in the village of Sevar, Kubrat region. He graduated in law from Sofia University in 1932, after which he worked in the Ruse County Court. From September 24, 1934 he was mayor of the village of Trastenik, Ruse region. He was the chairman of the youth cultural and educational organization of Dobrudzha. He spoke French, Russian and Turkish. From September 15, 1940 he was seconded as mayor of the village of Stozher, Dobrich region, and from January 13, 1941 as a district governor in Tutrakan and from January 29, 1941 he was reappointed mayor of the town. He had a son Ilko / 1941 /. From November 8, 1943 to September 11, 1944 he was a district governor in Silistra, as a result of which he was put on trial and sentenced to 5 years in prison. After that he moved to Ruse and until 1959 he was not allowed to practice law. He worked as a worker in various factories in Ruse and from 1959 to 1975 he was a lawyer in Razgrad. He died on October 25, 1988 in Ruse.

The writer Dobri Nemirov wrote in his memoirs about his meetings with Petar Drumev during his mayoralty in Tutrakan:

“I move around Tutrakan, talk to people I meet, drink a cup of coffee or brandy with them and try to guess where the change of Dobrogzha is reflected and in general what the image of today is now, after the displacement of our border. Cars squeak, barges and steamers are loaded and unloaded, sellers of this and that are shouted – everything goes as in any city. And I want to see the face of a resurrected city and feel it suddenly!

The citizen here may not seem very dexterous and fast, but if you talk about the old battles, the faces change, the eyes become alive, sparkling, the words flow with a special speed and you feel that little by little you are getting closer to the real face of life here. The Liberation of Tutrakan in one fell swoop turned and covered the pages of slavery and quickly reached the pride and glory of the Bulgarian. What can we talk about here, if not what today adorns the crown of this great town in its suffering? And it is becoming increasingly clear to me that Tutrakan is now a huge pantheon. And tomorrow, when the economic life is moving and each city finds its livelihood, there may not be much time to talk about the terrible events here. But what else can we talk about today if not the past? Aren’t the spirits of the thousands of sons of Bulgaria hovering here? And I think that (God forbid) days of great happiness will come for Bulgaria and the eyes will be turned forward, but Tutrakan will remain a temple where the spirits of those from the past will meet to spend the night in silent communion. Prosperity and economic growth will not pass Tutrakan, but he, who is associated with suffering, death and triumph – will shine like an unquenchable lamp in the life of Bulgaria.

I’m talking at the bar with new acquaintances. Everyone feels obligated to say something about “that time”.

“Infantry is advancing through Denizler and Meshe-mahle,” one tells me. “Scary thing, hey!”

And pictures begin to line up, in which events unfold from each other more vividly and interestingly. The conversations here are most often connected with the battles around Daidar, around Antimovo, around Staro Selo … Here, for so many years now, these villages, which came to life thanks to the death of many young Bulgarians, shone like suns. Well, that’s right. Today they are suns, because they are reality and history, and symbols of eternal life.

How many memories from the past! None of the furrows of the Tutrakan battles have been erased here. Everything is visible and the figure of the one under whose footsteps the earth trembled is imprinted on everything.

Here all but one of the Bulgarians took part in the battles and today they bear reflections of their experiences. I am extremely happy to see a whole spirit in the face of every citizen – as strong and cheerful as it was in the past.

The people entrusted with the task of arranging the new life in Tutrakan have already become my friends. Everyone carries a social task and it accompanies him everywhere day and night. And this task leads to one thing: a new livelihood must be created in this city, to be cleared of stagnant and moldy hopelessness, and new areas of activity to be discovered. I had conversations with these people. If everyone’s plans are really realized, then Tutrakan will have to look like one of the most anointed small towns in Europe. But the dream is one thing, and reality with its scarce possibilities is another. Of course, the people here also make their reservations by not giving up working and sacrificing around the clock for the city.

I was a guest of the mayor Petar Drumev. He does not play with strangers, and does not fantasize. The city is lying in his soul with all its primacy, poverty and hardened antiquity. His dream is for the city to be renewed. As a fishing center, it brings many opportunities, but the city needs to be comfortable, which means to make straight streets – well connected to the roads, to build new buildings, to streamline fishing, to channel the city by electrifying the most refined.

As a person from Tutrakan, this undoubtedly smart, talented and cultured man has the ambitions of a real builder. And at that time, when he brings new things into Tutrakan’s life, he also encounters everyday life, which increases his worries a hundredfold.

The corridor in the Municipality is full of women.

Everyone speaks suddenly and almost nothing can be understood.

– From Northern Dobrudzha – more than Tulcea.

One of them said:

“They can’t guide us, Mr. Mayor.” We want to get heating. Winter is already raging.

The mayor tells them something and they leave satisfied.

“Here’s what a reasonable promise makes,” I say.

“A promise that puts me in terrible trouble,” the mayor said. – But everything will be easy. I have to find what they want.

“Yes,” I explained. – A well-conscious duty is a success.

– Exactly. It costs me a lot of nerves to deal with these shifted layers of life, but every success gives me strength for new activities and courage to endure new worries. The dam had already unlocked and flooded the ground, which was waiting to be bathed.

My conversations with Mr. Drumev opened the soul of the mayor – the so-called head of the city. His projects, so harshly stated, are something difficult to achieve, but when you see how they are realised, you begin to look at the mayor as the person in the fairy tale who works miracles only with a wave of the hand.

Here I kept my tale. I’m embarrassed to talk about myself. The honors that the city has given me narrow me down, so I pass them quickly.

In Tutrakan I watched a performance of the moving troupe of the famous talented artist Boris Denizov. A small but tight log. Denizov is clearly leading his troupe to good moral and material success.

The long road that awaited me in the bosom of Dobrogea did not allow me to stay longer in a city. True, Tutrakan is too close to me, but aren’t the other Dobrudzha cities close to me?

I visited the school here. Bulgarian children have already been led by their teachers on a safe path. They will process those citizens who will take real care of tomorrow. Here, they go to school almost ragged and barefoot. Is this the way of spiritual empowerment?

We drink tea in the pub shortly before departure. Of course, our conversations are again about the past, from which the Tutrakan epic was assembled. At one point the door opened and a middle-aged woman, too scantily clad, entered. She stood at the counter and said briefly and rudely:

They served it to her. She grabbed the glass, deftly swallowed it, paid, and left. The life so far with its foreign customs shows its terrible image from time to time, but that did not frighten me. “The dam has already unlocked and flooded the ground, which was waiting to be bathed” – that’s right, Mr. Drumev!

Undoubtedly, Drumev is the mayor who faced the most natural trials during his rule – the earthquake of November 9, 1941, the great flood in March 1942 / photos / and the sliding and collapse of earth layers in the eastern and western part of Tutrakan, landslides continued in the period April 3-9 of the same year 1942. All this, accompanied by the processes of accommodation and settlement of Bulgarians coming from Romania with their families after the Craiova Treaty – more than 2,000 people were relocated from Northern Dobrudja and settled in the city.

After Drumev’s reassignment, other municipal employees were accommodated in the house, and it was later given by the state to Vasil Vangelov Torbarov, as compensation for his properties that remained in Romania. The current owners bought the house from him in 1960 and today it is used for residential purposes.

The house consists of a mezzanine, dug into the ground about 50 cm, consists of a garage and an office space. Overlooking the main street, the second floor has two beautiful windows with vertical pilasters around them, with a terrace and an attic with horizontal cornices typical of urban post-Liberation architecture. The house is built of baked bricks, the original white color has been replaced by pink. No significant changes have been made to the construction of the building. The cracks that appeared over time have been plastered and repainted in the period 2000-2005.

On the first floor, at the beginning of the democratic changes after 1989, there was a shop for antifreeze and car oils.