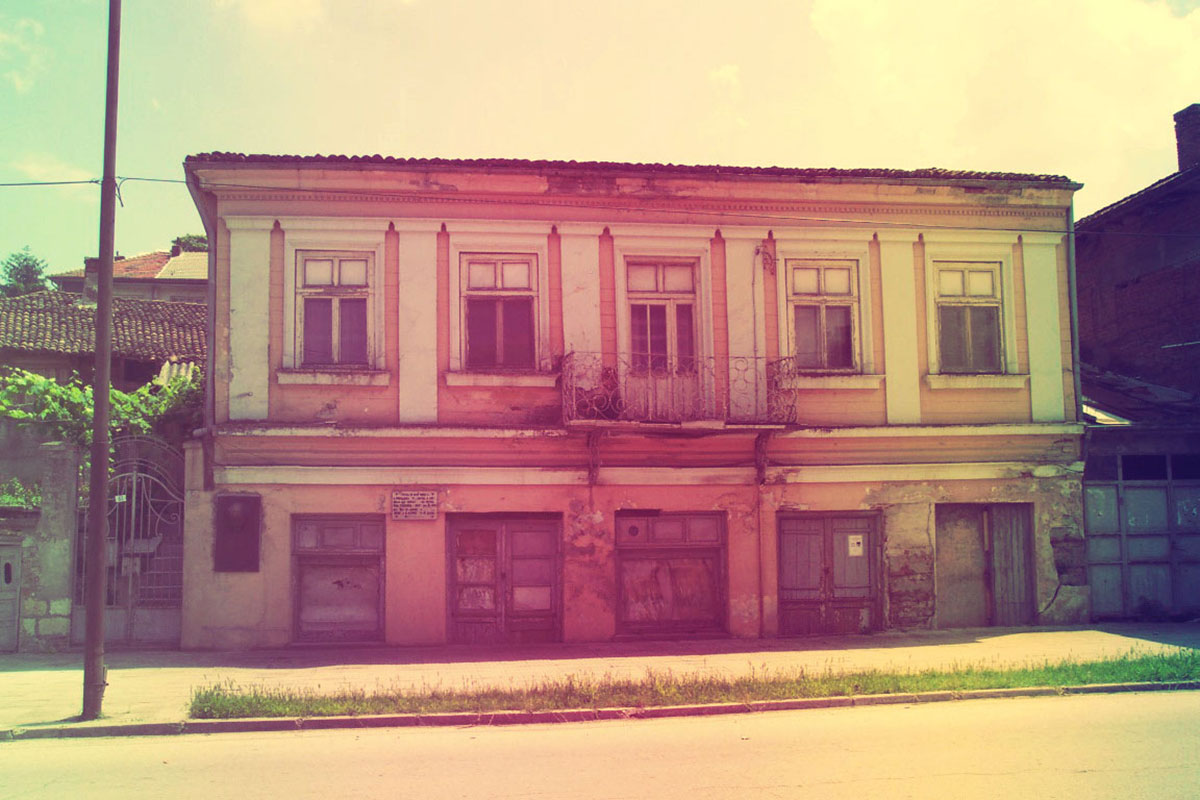 The first owner was Denyu Manev from Tarnovo, an abadji, a volunteer in the Russo-Turkish war of Liberation. In 1884, as a volunteer, he was landed by the state in Tutrakan and bought a yard with an old Turkish house and built the current house for his family in the spirit of post-Liberation architecture and for the purposes of his craft – on the first floor is Master Denyu’s shop, in which he and his apprentices worked diligently.

In 1892, the municipality of Tutrakan organised the participation of its craftsmen, bearing the travel expenses of 10 people to represent the city’s production in the first trade fair in Plovdiv, which marked the beginning of today’s Plovdiv Fair.

The mastery of the Tutrakan craftsmen received serious recognition, and Denyu Manev returned with a bronze medal for his ready-made clothes. The first Bulgarian exhibition was born as a result of the development of the economy of Bulgaria at that stage and has the task to show the new forms of production in the country, to bring Bulgarian producers and traders closer to Europe and the world. The first Bulgarian agricultural-industrial exhibition was in Plovdiv in 1892.

The name of master Denyu Manev is present in several editions of the Bulgarian Almanac in its part about Tutrakan, and for 1896, 1897 and 1900 he is mentioned as one of the three abadjis in the town. In this house in 1899 was born Penka Tsaneva – Blenika, a Bulgarian poet as the last of the five children of the abadji and his wife from Zheravna

BLENIKA, Penka Tsaneva – a poet. Born on February 8, 1899 in Tutrakan. Her father Denyo Manev is from Tarnovo, an abadji, a volunteer in the Russo-Turkish war of Liberation. In 1884, as a volunteer, he was landed by the state in Tutrakan. Her mother Kaluda is from Zheravna. Penka Tsaneva’s childhood was spent in Tutrakan, where she studied until the second grade of high school (now 6th grade). After the death of her father, the family moved to Tarnovo, where during the period 1911-1916 she lived and studied. At the age of 16 he remained a round orphan. From 1916 she settled in Sofia and started working in the accounting department of the Union of Agricultural Credit Cooperatives. She graduated as a private student at the Tarnovo Girls’ High School (1918) and Slavic philology at Sofia University (1925). Teacher of Bulgarian language and literature in Sofia (1937 – 1946), editor of the magazine “Woman Today” (1952 – 1958).

She made her literary debut in 1919 with poems in the newspaper “Ravenstvo”. She has published poetry in the newspapers “Vestnik za zhenata”, “Literaturen chas”, “Literaturen Front”, in the magazines “Kooperativna Prosveta”, “Art and Criticism”, “Zhenata dnes”, etc .; stories about children in the magazines “Prozorche”, “Children’s World”, etc. Her first book, Shores (1932), was well received by literary critics. The main theme in her work was motherhood and love. She did not forget her homeland and carried Dobrudzha and the Danube deep inside. She experienced dramatically the Romanian occupation of Tutrakan and the whole of Southern Dobrudzha. In the book “Along the White Danube. Memoirs ”(1987) Blenika told about her childhood in Tutrakan, about her native house and family. She was the author of “White Bird” (1937), “On Post” (1952), Lyrics (1960), Selected Poems (1976, 1979, 1990) and others. Translator from Czech, Polish, Serbian and Russian.

Penka Tsaneva-Blenika is the wife of the prominent Bulgarian literary historian and critic Acad. Georgi Tsanev and the mother of Acad. Rumen Tsanev – molecular biologist and of prof. in History of Bulgarian Literature Milena Tsaneva. She died on December 12, 1978 in Sofia.

In this house Blenika spent her childhood and in her memoirs described in the collection of stories “Along the White Danube” with the unadulterated worldview of the child takes us to the atmosphere of the old Tutrakan from the beginning of the last century.

From the short-story “White Danube!”

Across are the Danube and the other bank … How desolate and sad this flat, endless field looks from here. And this dark, dense forest, like a black strip by the shore. It must be scary there. Terrible magicians and evil spirits must live there – see how the coastal trees are distorted!

How much nicer the shore is. Here the trees are greener, here you can see birds and flowers, here live good people that we know. And the Danube, the wide, strong Danube, guards both day and night and does not let anything bad pass through here. Ah, that Danube! I look at it all day and I can’t take enough. And if your grandmother tells you that there was no Danube where she was born, can you understand what a town is without a Danube?

My brother is sitting on the balcony next to me, thundering with his elderberry squash with watermelon bark bullets.

“When it explodes now, it will reach Ardisha!”

“Hey, there, the shiny water behind the forest.” It is a river, flowing into the Danube.

What a wonderful name! I thought that all rivers were the Danube. How can it be said: “I’m going to Ardisha, not – I’m going to the Danube? ..

The sun sets over the waters behind the island. “He goes to his mother,” said Grandmother. She has baked nine loaves of bread for him and slaughtered nine barren cows to feed him.

“The water is shining.” Goldfish are chasing in it. Isn’t this the golden river where they drowned the good girl and she became golden? …

A cloud of smoke floats …

Children rush down the street shouting and running to the port. My brother stuffs the squash in his pocket and runs outside as well.

When I get older, I will go to the port every night. I will watch as the steamer approaches, as they throw the heavy iron anchors, as they lower the pontoon and descend on the bridge with suitcases and barrels of  strangers unseen. And one day I can get on and sail with him.

The steamer approaches and grows before my eyes. The chimneys, the windows are clearly visible, and the people on it are different. He passes with a waving flag and turns towards the port. Listen, play now! The Hungarian steamer. I know by the whistle.

I climb the mulberry. It is also a steamer. I sway on the branch with all my might and travel. The steamer break the waters, carries me along wonderful shores, far, far away, to the end of the world …

From the short-story „Surya lamia“

From Itsko’s words I feel a kind of pride – how nice it is that I was born in such a city, a city with the Danube, with steamers, with the most boats and with a lot of fish. Mom often sends to the bakery whole trays of fish – toasted, for red. That’s how I like to eat them crunching the fish bones.

– What else is written about our city? I ask Itzko.

– What! That a lot of wheat is exported from here. Don’t you know how many barns there are in the city? Have you not seen how grain is loaded on barges and carried along the Danube to other countries?

How can I not know the barns. Stoyko’s barns are next to our house. We often sneak in through the back window and dig in the wheat.

After the death of his father, Denyu Manev’s family moved to Tarnovo, but Tutrakan and the Danube remained forever in the heart of Blenika.

The next owners of the house are the generations of Neno Donchev.

The first floor in the past was used as a restaurant – in the 50s of the twentieth century there was a pub, where one can purchase also soft drinks for home / photo / – glass bottles for sparkling water, traditional at the time. Today, it is a public laundry. In the upper part, where the families lived today, there is a hotel.

The building consists of two floors and an attic, the first of which is dug about half a meter into the ground. It is built of baked bricks, glued with mortar. The horizontal cornices and the vertical pilasters are preserved on the facade. The color is yellowish, and the color of the horizontal cornices and vertical pilasters is white. The current owners carry out conservation and restoration of the house between 2006 – 2009. The facade is slightly raised with an attic, but the appearance of the house has not changed. A new plaster was made and painted. The memorial plaque has been preserved.