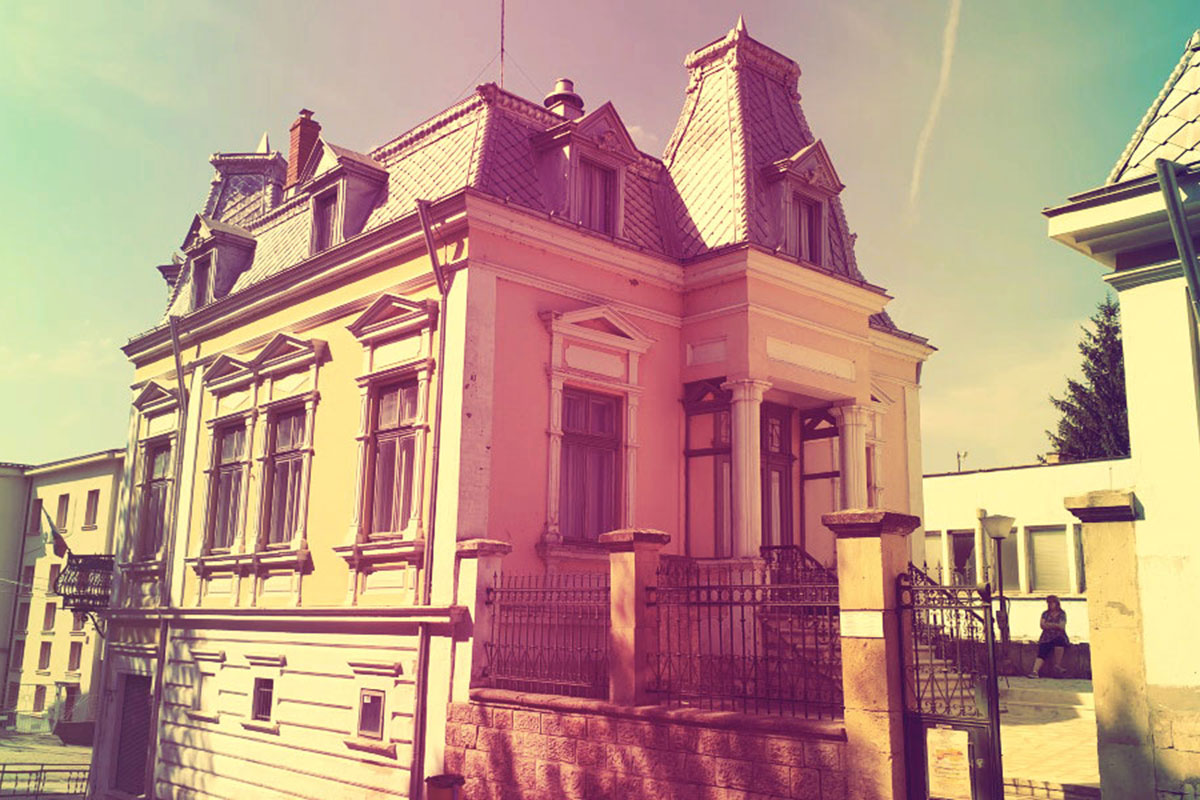 The house of the volunteer Dimitar Teodorov, built in 1899 – 1900 in the style of “late secession”, is one of the iconic architectural values ​​of the town of Tutrakan. The building was restored in 1991-1992 and adapted for the History Museum in 1993 by arch. Stefan Bonev. Here is presented the history of Tutrakan and the Tutrakan region from the past to 1944. During the restoration the exquisite roof, the extremely beautiful window cornices, the exquisite lines of the facades, the pilasters and the beautiful wrought iron balcony have been preserved. The fence is also beautifully crafted and preserved.

Born in 1850 in the town of Sevlievo. He grew up in a family of craftsmen. Together with his brothers, he left home early and went to Romania. There they apprentice to raise funds for

your education. Dimitar graduated from high school in Odessa. He has extensive knowledge of French, German, English, Russian, Romanian and Turkish. Before the Liberation he settled in Romania, where he joined the national liberation movement of the Bulgarian emigration. It is a connection of BRCC on the Ruse – Bucharest canal. In the summer of 1877 he left for the city of Ploiesti (Romania), together with his younger brother Hristo and enlisted in the Bulgarian militia. With his volunteer company, Dimitar Teodorov was included in the Front Detachment. He took part in the battles near Stara Zagora and the Shipka Pass.

For about 5 months he has been at the positions of Shipka peak. During the severe winter, his leg froze, and he received a wound on his arm, which could not heal, so he was taken down to the village of Shipka, where Bulgarians treated him.

After the Russo-Turkish War of 1877-1878, Dimitar Teodorov was landed in Tutrakan and traded in cereals. During the political crisis in Bulgaria in 1887, together with his brothers, he took part in the Russophile revolt in Silistra. After the failure of the revolt, he was persecuted and settled in Ruse. He returned to Tutrakan a few years later. Created a home and a family.

He then built his house using a similar building from Vienna as a prototype. In Tutrakan Dimitar Teodorov developed a successful commercial activity. In addition, he was taken an active part in public life. One term was elected a member of the Tutrakan City Municipal Council. He was also chairman of the Tutrakan Society “Bulgarian”, founded on September 8, 1902. He was a member of the Macedonian-Edirne Society in the city. He was included as an advisor to the fund “For the construction of a theater hall and community center” in Tutrakan, established in 1908.

When Romania seized South Dobrudzha in 1913, including Tutrakan, Teodorov was evicted from his own home and the Romanian commandant’s office was housed in the house. He was forced to immigrate with his family to Ruse, where he died on July 29, 1929. In 1930, his volunteer uniform was handed over to the Military Museum in Sofia.

During the years the building was used as stage for shooting classic Bulgarian films as,, On every kilometer”, „The judge”, „Notes on the Bulgarian Uprisings”, annual scientific conferences are held.

The first film, which premiered in 1969, is the most successful Bulgarian series “On every kilometer”, starring a galaxy of Bulgarian star actors such as Stefan Danailov as Major Nikola Deyanov, Grigor Vachkov – Captain Dimitar Bombov (Mitko The Bomb), Georgi Cherkelov – Bogdan Velinski, Georgi Georgiev – Getz – The Duke, Pepa Nikolova (Jalma), Kosta Tsonev, Nevena Kokanova and many others. Among the screenwriters are Pavel Vezhinov, Svoboda Bachvarova and Georgi Markov, also known for his “External reports on Bulgaria”. The film crew chose the streets of Tutrakan as the setting for the first episode, called “The Barges”.

The premiere of the film “Notes on the Bulgarian Uprisings” is in 1976, and it can also see the incredible talent of screenwriters, directors, cameramen and actors Stoyan Stoev (Zahari Stoyanov), Radko Dishliev (Georgi Benkovski), Antoniy Genov (Panayot Volov) and others. For their participation in this film, the three received the award of the Union of Bulgarian Filmmakers for debut in 1976, and the film itself was awarded the “Film Critics Award”.

The film “The Judge” shows a number of fishermen’s houses in the Fisherman’s Quarter in Tutrakan as they looked in the 80s of the XX century. The film premiered in 1986 and starred the unforgettable Joko Rosich and again the great Georgi Cherkelov. All three films show footage of the old whitewashed houses, the old wooden bell tower of the church “St. Nikolai ”and, of course, the Danube River. In the first episode of “On every kilometer” you can see wonderful shots from Theodore’s house (now the Historical Museum) and the then high school (now Ritual Home).

Also, all three films are related to specific events in our history. The first begins with the events of September 1923, described by Geo Milev in his expressive poem “September”. Years later, his daughter Leda Mileva – our famous poet, will be one of the initiators of the film. The second film examines the events surrounding the April Epic and the struggles of the Bulgarians for national liberation, screened in Zahari Stoyanov’s Notes on the Bulgarian Uprisings. The time before the Unification of the Knyazhestvo Bulgaria with Eastern Rumelia, the times when people in crowds burst into the cinemas (and there were two of them in Tutrakan) or when the streets were deserted, because our only television broadcasted another part of sensational Bulgarian series, those times have passed irretrievably.