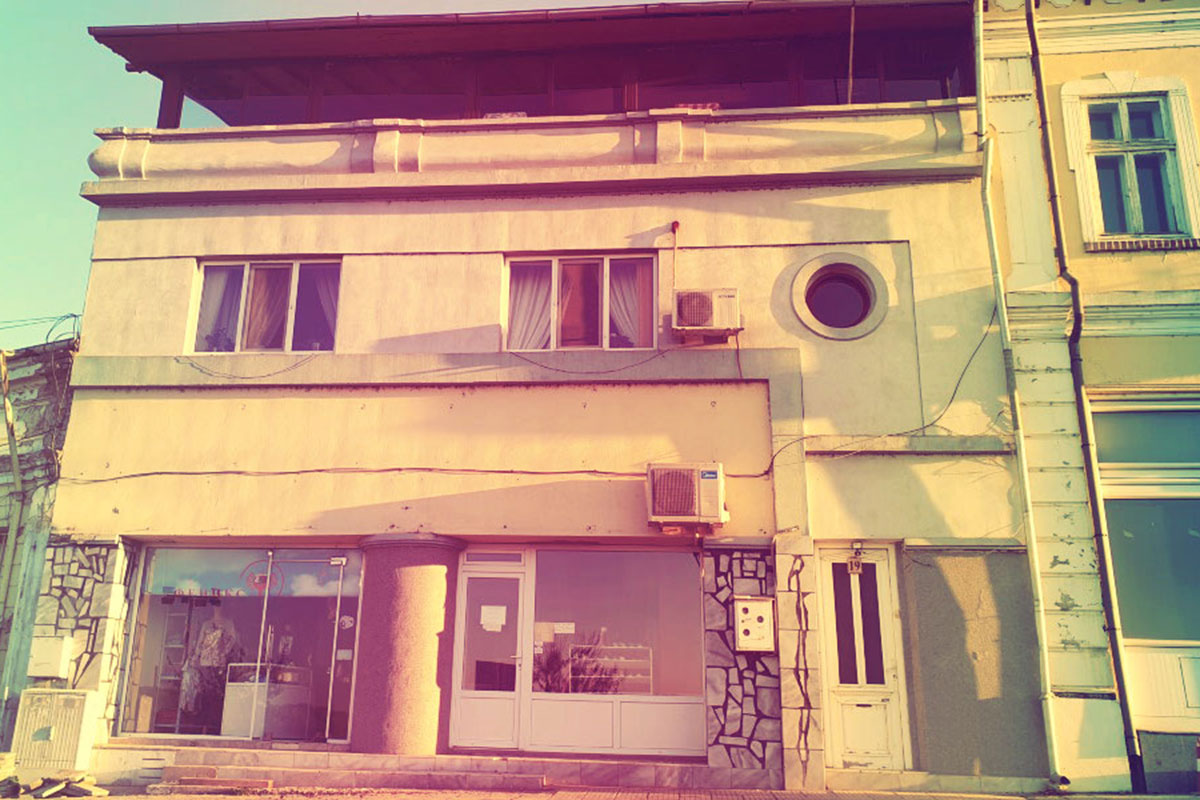 The house was built in 1933 by the family of Peter and Dimitra Gabrovski. Before that, the first shop floor existed. Petar Gabrovski is a merchant from Tutrakan, one of the leading figures among the Bulgarians in the city during the Romanian occupation.

. From February 8, 1903, with breaks until March 7, 1907, the newspaper Tutrakan News was published in 33 issues in Tutrakan. Its owner-editor was Petar Gabrovski and it was printed in the famous printing house of Mavrodinov / reference /. He also owned a bookstore, which in 1934 was supplied with electricity from Nikola Keremedchiev’s small diesel power plant / reference/.

P.554 History of Tutrakan p. 2 Nikola Keremedchiev is the owner of a shop for alcoholic beverages, a restaurant with hotel “Danube” and a cinema; there is a small diesel power plant (since 1934), with electricity used by its restaurant and hotel, the Municipality, the Court, T. Atanasov’s restaurant, Gabrovski’s bookstore and part of the street lighting on the main street.

Their heir was Velichko, who completed his education in Calarasi and married Virginia in Romania. In 1940 there was an office of the Strela News Agency in the town and Veliko Gabrovski was its representative, and at the same time it had its own bookstore, but it was not in the house .

After 1945 he was secretary of the Tutrakan city municipal administration.

The owner of the house today is a relative of the Gabrovski family from another old Tutrakan family – Dimovi.

The building is massive, brick, plastered with mortar with a characteristic modernist architecture, which is due to the later year of construction of the second floor. It was built on two floors, and later an attic was built. The characteristic feature of the house is the round window located on the second floor. The first floor is intended for a commercial space. Tightly to the right of the side of the house of Balkanbank is the front door. The house has a simple decoration, it is clear that over the years it has undergone changes. The decorative columns are smoothed, some of the pilasters are missing. The decorative cornices under the roof structure are preserved. In 2000-2010 the facade was legally repaired, the building was erected, a new attic was made.

For many years the first floor of the house was used for various shops – for fabrics, and during Socialism – the western room – for a bread shop, and the eastern – a pastry shop, where Uncle Ashim offered various delicacies, including – a mug of boza with a ball of milk ice cream. The two rooms were not separated by a partition, but with 2 short wooden latticed doors like the pubs in the cowboy movies.

In the first years of the democratic changes, a shop for newspapers, magazines and books was operating in one of the premises.

From February 8, 1903, the Tutrakanski Vesti newspaper started, which was published intermittently until March 7, 1907, reaching the number 33 of the printed issues. Its owner-editor is Petar Gabrovski, and his printing house is again that of Mavrodinov. As a local public newspaper, he set himself the task: “not to oppose this or that party”, but to raise “the veil behind which several Tutrakan Vlachs are hiding”. He opposes Romanian propaganda and speaks out against those who work only in the interests of the city’s Vlachs.

The newspaper plays the role of an unofficial printed organ of the Bulgarin friendship, maintains an orientation towards the People’s Liberal Party. He is fighting for control of the municipal government and for winning seats from its supporters and supporters.

The coexistence of different ethnic communities in Tutrakan predetermines the formation of different local elites. The leading figures among the communities of Romanians (Vlachs) and Bulgarians in the city in the first years after the World War are mentioned in information from the local priest Ilie I. Nicolau from 1921.

According to the quoted priest, the respect of their fellow citizens for the Romanian leaders is due to their role in the social, economic and political life of the city, while for the Bulgarians – the leaders are respected because of their “financial power”. This interesting observation highlights some psychological characteristics of the traditional communities living in the city. While among the Vlachs (Romanians) the leadership authority is based on a more pronounced social hierarchy, among the Bulgarians it is built mainly on the power of material prosperity in a community with more pronounced egalitarian attitudes.

List of inventory items taken by the Romanians from the Turtukaya Telegraph and Post Station when they left South Dobrudzha in 1940.
No location, [b. d.] 1940

The data is collected by the citizen Petar N. Gabrovski, living on 2 “29”str.

We would like to inform you that our Company is called: Tutrakan Popular Bank – Credit Cooperative Association.

It was founded in 1916 and rebuilt after the liberation of Dobrogea in September 1940.

Our association has 786 members.

The Management Board consists of the following persons:

The Supervisory Board consists of the following persons:

The above persons were elected by the General Annual Meeting of our bank, held on April 1, 1945.